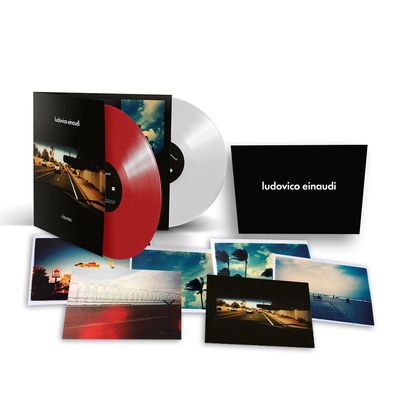 Presenting a new collection that takes the listener through Ludovico’s incredible musical journey working in film & television. 28 pieces from the big & small screen including two previously unreleased tracks
Includes music from films and series such as This Is England, The Intouchables, I’m Still Here, Golden Globe Award-winning and Oscar favourite Nomadland, Samba, Insidious & many more
Award-winning scores such as Fuori Dal Mondo (Oscar nominated, Echo Klassik award) and Sotto falso nome (Avignon Film Festival) are also included. “They say my music is cinematic…it is always interesting for me to see my music combined with images, it is like rediscovering reading my music with a different perspective” Ludovico Einaudi
“He sat at the piano and what wasn’t a film, became a film” Shane Meadows
“When I was directing The Water Diviner, I had a setup with the sound department, they had a little PA system, so I could play music on location. Between setups, you want to keep the crew focused on what they’re doing, but you also want to keep the actors in the mood. I was using [Ludovico’s] music a lot on the set just to keep the goosebumps on people’s skin... it makes you feel like you’re actually inside the movie” Russell Crowe
“I started listening to Seven Days Walking and was so amazed by how I felt Ludovico was walking in the Alps. I felt like he and [the character of] Fern were walking in parallel; their shared love of nature connects them, and I knew then his music would fit perfectly with our movie” Chloé Zhao